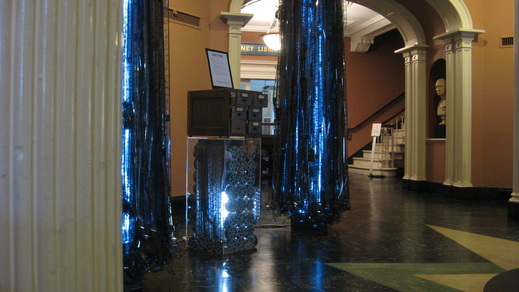 Here are some Anablog entries from the previous website, burkecolin.com:
February 2012

I was playing around with the code of some of the website design templates and not sure if I actually "published" one of them. But now it seems to be back to what I had prior to that, so good.

The template I settled on is pretty close to what you see here now. I liked the clean simple presentation. I wasn't digging the scroll bars in the window thing, so I went back to hack away at the code. Then I found something closer to what I wanted, only the font was an awful pumpkin / burnt orange color. That doesn't work for me, so I went into change the color to the gray you see here. Yes, it's still alittle light, so I might tweak it again.

In other news, I'm pretty much all packed up now, just a couple of things I have to dismantle and then load up the moving truck and take it over to the new studio (pix of the raw space are on the news page). The new place is roomy enough that I hope to have space to work on new projects and maybe do some demos/workshops in the future.

Official opening won't be for a while. But I will try to have some kind of open house thing after winter is officially over.

1/30/2012It took about 2 1/2 hours to deinstall my installation at the New Haven Museum. I had to finish before 5pm, when they close. I knew it'd be quick, but that surprised me.

The other amazing thing was I was able to fit everything in the MINI without much problem. I just bagged up all of the microfilm and squooshed it into the back of the car around the plexi pedestal. The card catalog fit on the passenger seat. So, I didn't need to take multiple trips/car loads, or, leave anything behind to pick up at another time.

If I include the proposal writing, designing, re-writing, re-designing, materials procurement, fabrication and the actual on-site installation, it totals well-over 100 hours.  So, I'm not really exaggerating the ratio.

The rest of the week includes studio packing continued, moving out of the studio, meeting someone about giving a workshop for students with special needs, an art opening, and a sunrise photo shoot at the beach.

I probably won't make it to all of these things. I have to finish the pack and move first, and then prep for the workshop next week.

After that, my schedule  is a little less jam-packed.

I finished my application for an artist fellowship, aka "grant", last night with ten minutes to spare before the midnight deadline.

Here are some things that made it easier for me:

1) Keep a calendar with a category just for application deadlines and use the reminders.

2) Update artist resume after (or just before, if there's time) any new exhibition, workshop, etc.

3) Do a year end wrap up and maybe something will pop up to add to the resume.

4) Edit those photos of art work now, not later. Keep Tiffs, RAW images, and save as jpegs under new file names.

5) Write up in a text editor first. Write as long as needed. THEN go back and edit to the word count or character count. Do some "save as" to go back to previous versions if necessary

6) If there's time, take a break after writing something and come back to it later. Fresh eyes can help with editing and proofreading.

8) Use the "Read Aloud" function on the computer and really listen. IThe computer only reads what is written, not what I THINK is written, catching some typos, awkward phrasing, and repetitive word choice.

9) Review all the instructions one more time.

12) Drink plenty of water, that way there are built-in w/c breaks.

13) Feel a sense of accomplishment when it's all done.

14) Don't worry about "getting" anything. Let it happen or not happen.