Solargraphy:
What is it and how does it work? 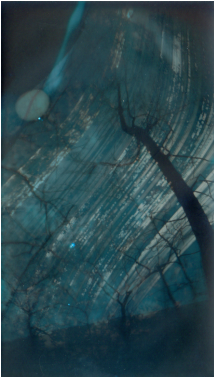 Solargrpahy is a long exposure photography technique using a pinhole camera. The camera is set to capture an outdoor view for a period of more than one day (preferably several weeks or months). The image capture on the paper negative shows the paths of the sun across the sky.

After the long exposure time, the camera is retrieved and the paper is unloaded in safe-light conditions. Because of the overexposure, the undeveloped paper negative will have a visible image on it. If the paper negative is  developed in the traditional darkroom, this image will be destroyed. The paper negative remains light sensitive.

(I'm still working on a way to chemically "fix" the solargraphic paper negative so that it can stops being light sensitive. This was also one of the major difficulties of early photographic experiments of the 18th and early 19th century. It is a major project that I hope to have time to work on soon.)

The result appears to be in color even though I use black and white photo paper.

These greens, cyans, and blues are the color opposite of the rose, pink hues of the untreated paper negative.

A pinhole camera is literally a dark box with a small pin (or needle) hole in the side. This hole becomes the aperture through which light can enter the box. The small hole focuses the light and an image appears, upside down and backwards, on the inside of the box opposite the aperture. If the box is loaded with a sheet of photographic paper, the image will land on the light sensitive paper. This paper then becomes a photo-negative.

The sun appears to move across the sky as a result of the earth's rotation. Throughout the year, the position of the sun's path changes. In the summer, the sun's paths are higher in the sky than in the winter.

On June 21st, the first day of summer in the northern hemisphere, and my birthday, the sun is at it's highest point in the sky when perceived from north of the equator.* On December 21st, the first day of winter, the sun is at it's lowest point in the sky, from the point of view north of the earth's equator. This is due to the tilt of the earth's axis and its position relative to the sun as it revolves around the sun. It takes one full year for the earth to complete an orbit around the sun.